I made some progress on the Ultramarine Librarian in Terminator armor today. I have gotten him completed through the wash phase and am waiting for the primer on the base to dry so I can get him based and finish up. 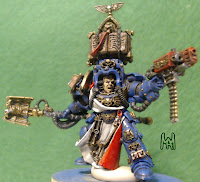 While waiting for paint to dry I also began work on the underwater Cave terrain pieces. Nothing much to show right now, they still just look like pink foam. The first thing I did to them was to apply a coat of Mod Podge to the surface of the foam. I had tried to paint directly on the foam, but the foam was absorbing the paint and I was using too much paint to get good coverage. My hope is that the Mod Podge will fill in the porous surface of the foam and allow me to get a good even coat of paint on the surface. I will update when I find out if this worked or not.

Posted by Archangel Mike at 11:48 PM No comments:

I have completed the first Individual Character in the Ultramarines project I am working on. I am quite pleased with how it came out. 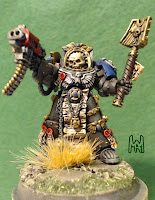 The next character model will likely be a Librarian in Terminator Armor, so stay tuned for that. It might even happen over the weekend.


I am going to be painting half of it as a standard underground cavern, using photos of Carlsbad Caverns as inspiration. The other half is going to be painted in an ice cave theme. This is going to have a lot of blue and white. Stay tuned for this as well I plan on working on this over the weekend as well, to contribute to Terrainaholic's Build-a-thon weekend. If you are not familiar with Terrainaholic he is a long time terrain community supporter and inspiration. Check out his channel this weekend over on YouTube to see what he is building. I will also be posting videos in response to the build-a-thon of the projects I am working on.

That is all for now. Until then Thanks for reading. Feel free to follow the blog and comment.

Posted by Archangel Mike at 1:00 AM No comments:

I have finished 2 of the Ultramarines Tactical Squads I have been working on. Here are some pics of some of the completed models.

Squad 1 with Flamer and Sargeant

Thank you for stopping by and looking.

Posted by Archangel Mike at 11:49 PM No comments:

Hello out there in wargaming land. It's been a while since i have posted here and wanted to let you know I am getting back to work. I am nearing completion on the rhino I posted previously and have some Ultramarines base coated and almost ready for washing. Here is the photographic proof that I have not been slacking.

Rhino with sculpted skull and banner

I will be trying to get back to a regular posting schedule at least once maybe twice a week. Thanks for looking and have fun gaming.

Posted by Archangel Mike at 6:38 PM No comments:

I finished the Ultramarine Terminators I was working on for a friend's Christmas present. Here are the pics of the finished minis.

Rear
I guess you could say he was happy with the way they turned out. So happy in fact that I now have 2 Rhinos, 2 Drop Pods, a Land Raider, and a host of marines to paint for him. After taking the time to strip the previous layers of paint from the minis I have begun to work on the painting. I have primed, pre-shaded, and base coated one of the rhinos and the doors of one of the drop pods.

There should be more to come soon. Thanks for reading. Followers and comments are always welcome.

Posted by Archangel Mike at 10:14 PM No comments:

Custom Bases for the Ultramarines and the Deathwing Terminators

I have created a few new bases for the Ultramarine Terminators I posted last week.

For the white bases I used sculpey oven hardening clay. I rolled out a strip of the clay and used a sponge to add texture to the top. After baking the strip and it hardening, I then broke it into the pieces I wanted for the bottom half of the base, and glued it to the base. I then I broke smaller pieces off to form the top layers. After the glue set I used Liquitex Basics Modeling Paste to fill in the crevices between the pieces on top to simulate dirt filling in the crack. While the modeling paste was still wet I also used some small ballast and pressed it into the paste for rocks in the dirt. The brown base is made completely out of cork. I cut the pieces to size and used a sculpting tool to dig pieces out of the cork. I think I like the sculpey bases better.

I have also created custom bases for the Deathwing Terminators I was working on, when I began this blog.

For three of these I just picked up some bark that had fallen off of the tree outside my house. Although this is wood I intend to paint it to look like rock. The one on the left I just wrapped a scrap of cork around it. The front base is a chunk of cork, with a sculpey disk on top of it. I used a scultpting tool to carve a Dark Angels chapter symbol into the disk. This wasn't really visible and since I wanted it to be seen in these pictures I gave it a quick brown wash to bring out the carving. aroung the cork I spread some white PVA glue and added the small ballast to fill out the base. Once I am done painting the other three, I will be adding my homemade sawdust flock to the base. I would do it before painting, but I have already tinted it and it looks better added after painting.

Posted by Archangel Mike at 8:13 PM No comments:

I have started the lady justice crew for Malifaux. All are primed and most have a base coat. Lady Justice on the other hand was begging to be finished. So here she is.

Posted by Archangel Mike at 11:18 PM No comments: